The Three Goals of Dialogue

Aside, of course, from providing work for voice actors, the dialogue in Iron Danger serves—you guessed it—three purposes:

Those are three goals that sometimes might not have anything to do with each other, while other times being intimately connected. This week, I thought we could take a slightly closer look at how we go about trying to hit those goals when writing dialogue.

You might not think so, but communicating stuff to the player can be really hard. On the user interface side, pointing out the relevant slab of pixels can involve moving it, putting a highlight around it, making it blink, enlarging it, changing its color… the list goes on. These are all tricks that use the inborn tendencies of our eyes and brain to guide our attention in the visual field. But we’re more complex than the average mammal, and we have an additional mechanism that most of them don’t: we tend to pay attention to what other people are paying attention to. There are two ways we can use this in our game: we can make the characters look at something, or we can have them talk about it. That latter option is one of the main uses we put dialogue to.

Of course, it’s not just about telling the player where to look; it’s at least as much about providing information the characters have, that the player does not yet have because of the limitations of an artificial game world. That’s why one of the earliest functionalities our coders built into the first Iron Danger prototype was an examine action, for when the player wants to inspect something the heroes come across during the game. 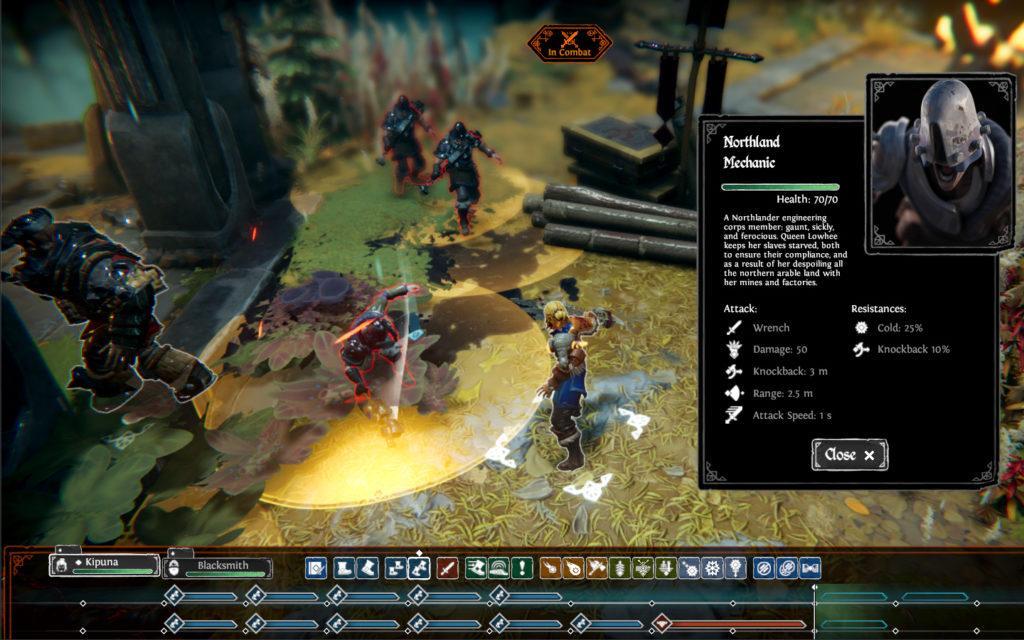 We wanted to have an experience reminiscent of older point-and-click adventure games and isometric RPGs, where the characters are surrounded by a large variety of objects of interest that the players can inspect at their leisure. While we don’t focus on complex puzzles, inventory management or the like, examining objects is still a core part of gameplay, giving the player advice on what to interact with and how.

A large slice of Iron Danger’s total word count (I’m not sure if it’s actually a majority, but it’s a lot) is in the form of back-and-forth conversations between two or more characters—that is: actual dialogue. Much of the story is presented in this form: the characters learn and make decisions through dialogue.

It’s all skippable… but if you do skip it, you’ll probably miss a big chunk of the story. In fact, we don’t want to put in any story-carrying dialogue that’s redundant in combination with gameplay. If we decide to tell something through player action, we don’t need to recap it with dialogue, except occasionally to clarify something.

Put in Some Flavor!

You could say these three goals are arranged in order of necessity: players need vital information to play the game. They want to know what’s happening in the story they’re playing. And the rest? Character personality and background? It’s just nice to have. You could say that… but I’d disagree with you. These goals haven’t been set up in a vertical hierarchy. Each one feeds into the others, making them more meaningful. 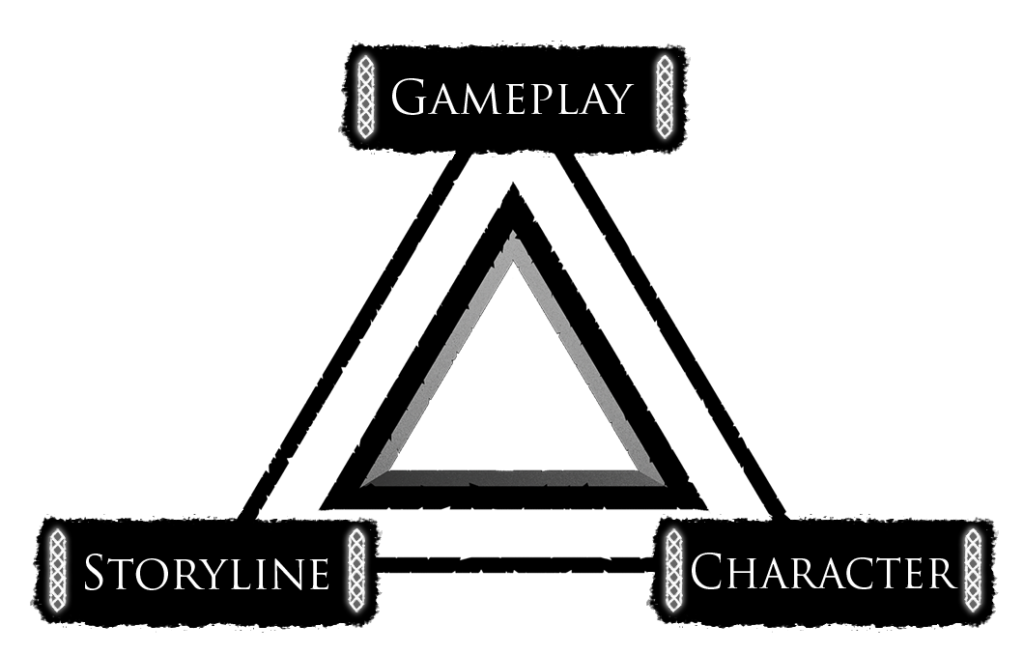 The background details and personalities motivate the player to care about the world and the characters, so the events of the plot gain emotional force. And the plot is vital to motivating gameplay: if you know that the heroine is looking for a shard of ancient power, you, the player, are going to be looking for one in the game. And going all the way around the circle, the gameplay is what brings out little details of the game world and the characters. 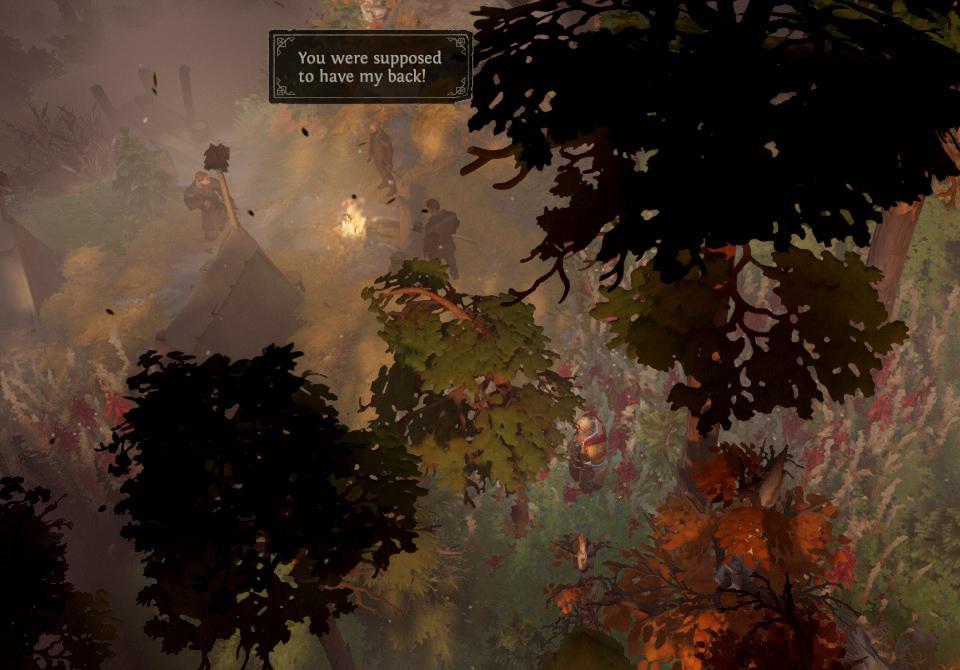 In addition, the interdependency of the three goals brings us to one core aspect of dialogue that works: it serves more than one purpose. Information that only helps gameplay is almost always dry. Dialogue that just advances story is typically boring, and usually skipped outright. And chit-chat that does nothing except show off the characters or the setting is useless. But combine two goals and nail both, and you’re… well, not guaranteed that the dialogue is worth the player’s time, but at least it’s a start. And if you manage to hit all three, you’re doing something right.

So, optimally, we’d like our conversations to move the story along, provide the player real information on what to do next, and round out our characters and setting, all at the same time. Whenever I write an exchange that manages to do that, I pat myself on the back. 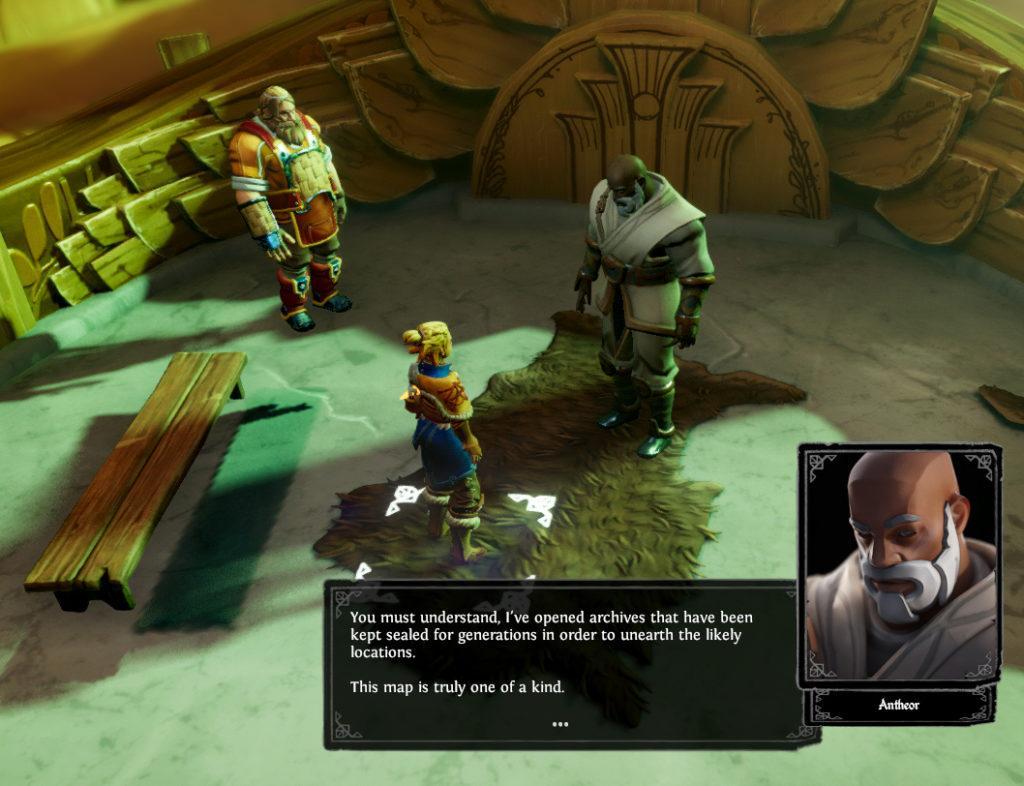 All About the Point of View

One way we try to approach this target of hitting two goals at the same time is, again, is with the examine action. When the player examines an object in the game, this prompts a short piece of text—a bark—from the currently selected character, just a line or two. But these barks are written from the point of view of that specific character, and different characters notice different things. Sometimes it’s even worth your while to examine the same object with two different characters, to gain twice the insight, both into whatever you’re checking out, and the characters!

Did you already read “The Story of The Story“, the first part of our writer’s series?

To keep up on most recent news about the game, remember to subscribe to our mailing list. Subscribers also have a chance to win free copy of the game!