This week we felt it was time to revisit one of the first levels ever made for the game.
The first time our heroes travel to an underground ancient temple in search of a magical shard.

The previous version of the level was made a long time ago and it felt like the focus and pacing was not quite right for that point in the game and story anymore. The game has come a long way since then especially with recent visual and AI changes that make the gameplay much deeper.

The end of the previous level is an intense battle against the rotspirit Keyus on an abandoned farm and the chaos can reach quite heights so it felt natural to begin the temple level with a more peaceful atmosphere. Give the player time to breathe and have a look around. I used the entry hall from the old version of the level as I quite liked the moose head sculpture and natural stone of it but instead of putting the player in small rooms and tight corridors I decided to have the entry hall open up to a larger hall lit by a lightstone operated by ancient magic. 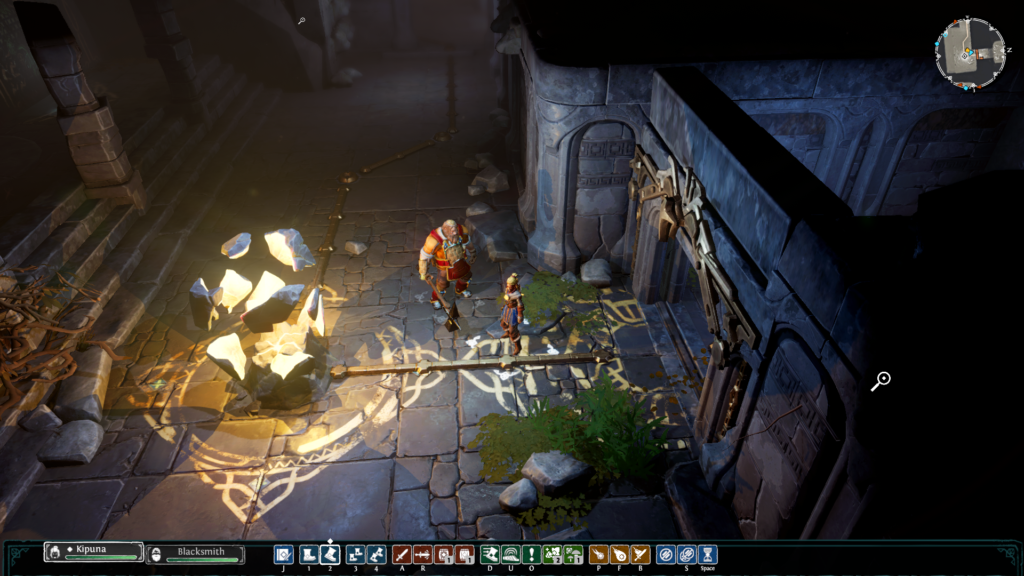 This space has only the function of introducing the temple environment to the player with enough room that it feels safe to explore for a moment. These first steps also introduce a door mechanism with levers that the player must operate in order to open paths. As the kind of player that likes to explore all the nooks and crannies of every game in search of loot, I put a small room to the side with some health and other types of items for those who wish to veer off the path.

The large room seemed a bit empty so carvings and statues were added to the walls, pillars and a staircase to a slightly higher platform were made. We even explored paintings for floors and walls. The look of the painted elements might still evolve before the game is released but they instantly added something very important to the feel of the scene. The paintings seemed like a great way to point out certain gameplay elements and I went around adding the art everywhere. 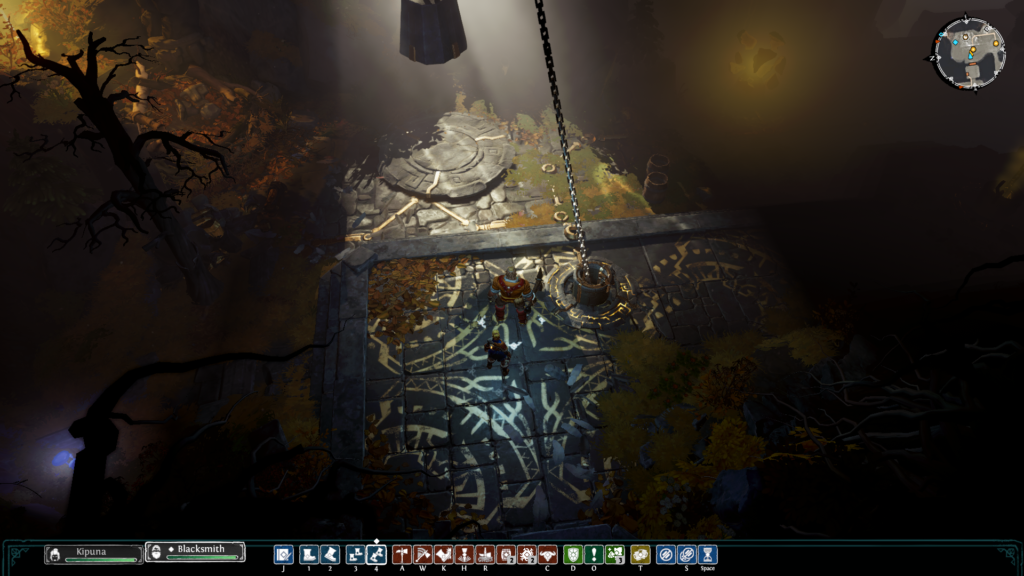 The introduction to the part of the game and gameworld felt like a success. The space felt mysterious, abandoned or empty and old. With nice touch of creepy. This was the easy part of the process though. The main function of the level was to introduce a few mechanics and even a couple of new enemies. First one of the new enemies was the Keyu Shaman. A rot spirit bubbling out of a corpse with the power to revive fallen Keyus in battle. I wanted to create an area or two where no matter how the player played the game a Keyu Shaman would be able to revive a Keyu at least once. Making sure the player knew of their ability and how it would affect future battles against the fairly easy to kill Keyus.

I wanted to create a scenario where the player, not knowing what to expect was drawn into a simple and easy battle against two Keyus but a Shaman would be nearby to revive them if the player killed one. I tried a few solution sand found that the Shaman should be easily visible to the player but not as easy to get to as the regular Keyu Brawlers. 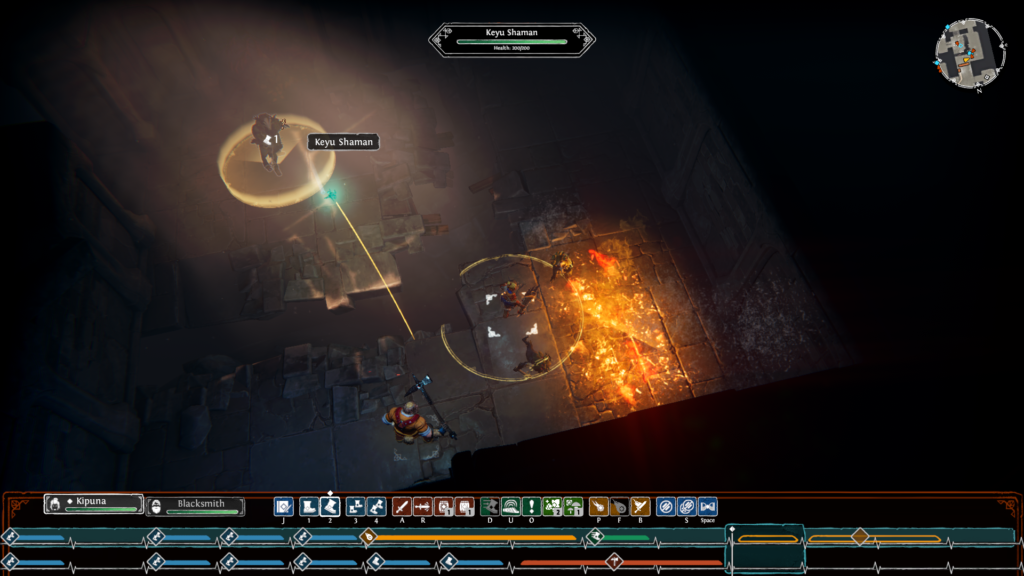 The solution was to make a room split in two by a broken floor. A path at the back of the room can be used to run up to the Shaman but the player would need to face the Keyus to get there. After some testing I felt the room worked nicely. The battle is simple and the new revive mechanic brings a new twist to the simple fight with Keyus. I felt clarity was king in the design here and wanted to make sure every player knew what the Shaman was capable of after the encounter.

I took similar steps designing the few remaining battles of the level. I put in a possibility try to avoid all out combat for the next encounter. Then I made a larger combat where the player would face two Shamans.

Suddenly the battle requires a completely different tactic from the Keyus in the previous level.
I felt like a more challenging variation of the big Keyu-battle should be put into another later dungeon in the game, where the player has more skills at their disposal.

Normally when I make a level I focus on giving options and paths but this time as we were introducing new mechanics, I tried to keep the areas simple. Open spaces and just the player party against the rotspirits, not too much anything else to add chaos. I felt like the first third of the game needed a bit of this clear and laid out style of design just so that players would feel like they aren’t making the wrong decisions. Later the levels open up and allow for many types of approaches but at this early stage it can be intimidating.

The big battle against the Keyus and two Shamans is definitely not a breeze even though the layout is simple and clear as you can see from the carnage. 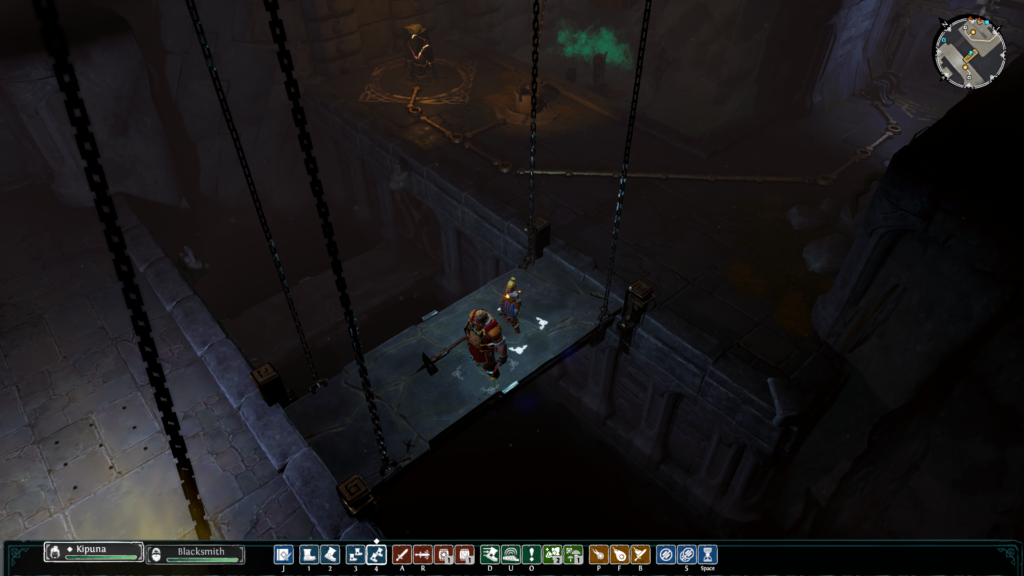 I also spent some time thinking about how to make a temple with such a linear layout feel mysterious and like there was a function to the space a long time ago.
I made some spaces appear much larger and added areas the player could not reach such as the bridge on the lower level in this screenshot.

After this reworking of the structure of the level I felt confident it was doing its function in the bigger picture of the game a lot better. Guiding the player but letting them figure out for themselves how to best solve the encounters. I’m already excited about working on the other temple levels and taking them visually to the same level as the first one is while making sure each one has their own mood and feel.

It’s always fun to revisit old work and make sure it’s still up to par and sometimes the changes are small, sometimes quite huge. There’s one thing I hardly touched at all in the level in addition to the very first entry hall and it’s quite huge too. But I quess you’ll find out about that when the game comes out. …It’s a bird. It’s a huge bird all right. Huge bird fight. 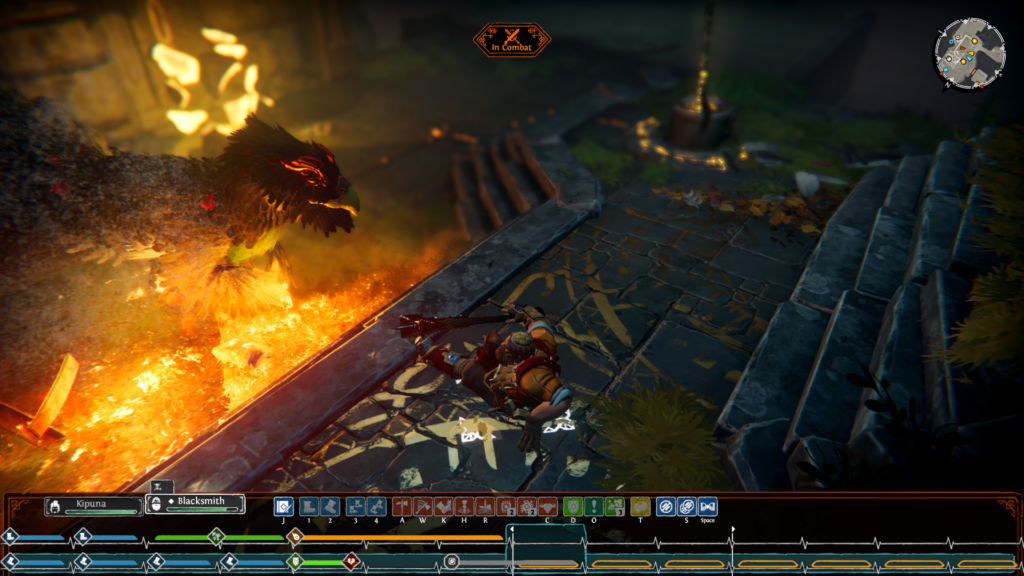